So what do you need for building an aquarium monitor (apart from a large crystal sphere)? Let’s start with the following boards – prices are approximate minimums (plus VAT) for the UK as of Jan 2011:

Also there are rumours of an Ethernet enabled version of the Uno being released at some point. Might be worth keeping an eye open for it as a single board would probably be cheaper.

Communication What you need connectivity-wise will depend on your home network. If you’re close enough to a router/switch or your ADSL modem, then you can probably just plug into that. Otherwise you could use a WiFi repeater, a range extender or a pair of Powerline/Homeplug adaptors should they be going spare. We’ve has good experiences with the WiFi bridge from Open:media, which appear to be a re-brand of the original Vonets VAP11G. Needs a PC to set it up but once running they seem to be nicely reliable.

Power (overwhelming!) Both the Uno and the bridge have internal regulators and so can run off a range of DC voltage (6-12V or so for the Uno; even higher for the VAP11G). This means you can feed them off a scavenged wall wart if you don’t mind splicing on a suitable plug (watch the polarity!) Both will run off USB power though (5v) so it’s easier to use a Mains to USB charger, as supplied for mobile phones or whatever. Cost is about £4 off Ebay and make sure you either get 2x 500mA or a single 1000mA unit and a passive hub to split it.

Sensors Since these are mostly self-built, you’ll need to acquire a suitable length of high flexibility 2-4 core cable (e.g. phone cable or unwanted mouse tails) to connect them. Scavenging a load of PC fan (and similar) plugs will also make your life easier, as they make convenient blocks to mount the temperature and Hall sensors on. Otherwise you’ll have to solder carefully and keep all the legs insulated from each other.

Other bits you may already have, can scavenge, or can get from your favourite web shop:

Tools We’d suggest acquiring at least: a small breadboard, solid core jump wire, an electronics soldering iron, flux solder, pliers, side cutters, wire strippers and a multimeter. But you have all them already, right? :)

Setting up your Arduino

Before going further you’ll need to be reasonably familiar with the Arduino hardware, its programming IDE and how to set up, load and run sketches. We’ll only cover this very briefly as it’s not the aim of this write up, however the basic steps are (assuming you’ve got your hardware!):

This diagram shows the pins we’ll be using for Palantir:

The row at the top (blue/white) are the digital pins, we only have access to some as the rest are needed by the Ethernet and serial communications. Digital lines can be read (in) or write (out), so can be used to drive LEDs, monitor the state of switches or communicate digitally with our temperature sensors. We can also use one of them to supply power to the analogue sensors – that way we can turn them off when not in use. The bottom row (green/white) are the analogue pins, these are read only and their applied voltage is converted to a 0-1023 ranged integer. These are used to monitor the pressure, light and Hall effect sensors. The reset pin will reboot the Arduino (and intentionally the shields, although this is buggy) when it’s briefly connected to ground (GND). The 5v line will be used to supply the temperature sensors. 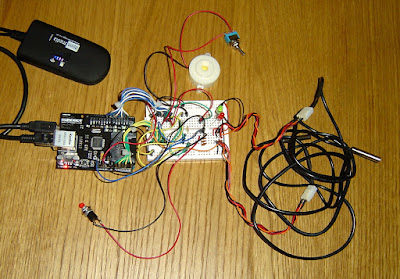 This is a ‘beta’ set-up for Palantir with a light and a couple of temperature sensors (yes, it’s a complicated mess!) The Ethershield is stacked on top of the Arduino, but since they have the same pin out to the breadboard you can ignore this. We’ll now step through the process of setting something similar.

The key libraries are already part of the IDE (we built this with v021, so things may change) but you’ll also need to download and install (unzip to the /libraries/ directory) these:

Finally, carriy out this ‘free up some RAM’ hack: open file ‘/hardware/arduino/cores/arduino/HardwareSerial.cpp’ in a text editor. Find ‘RX_BUFFER_SIZE 128’ and change it to ‘RX_BUFFER_SIZE 16’, just below there change ‘int head’ to ‘uint8_t head’ and ‘int tail’ to ‘uint8_t tail’. Save the file and restart the IDE.

First step, grab the source code and save it into a new blank sketch. Check it compiles (but don’t upload) and if so, go looking for the following lines:

Now check everything compiles ok. Upload it if you like, you’ll probably get lots of angry blinkenlights. So, on to breadboarding….