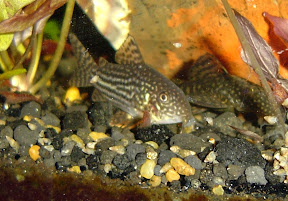 Corydoras (‘cory’) catfish are just plain cute. If you were introduced to them as cleaner fish, or detritivores, you might be put off or think they were a dull, utilitarian fish. But actually they’re delightful little dumpy things that bibble around the ground-level of a tank, snuffling the surface layer of gravel or sand with their tendrils like teeny proto-Cthulhus ;) They’re sociable and like to herd with a bunch of other cories, often falling together in a pile in a corner of the tank.

With these characteristics, we thought that they would be an entirely suitable subject for a beanie-buddy. (This train of thought might have something to do with the herd of Scorch buddies in the house.) As it turns out that Ty has not produced such a beast, we just had to have a go – armed with nothing but the experience of putting together a John Lewis rabbit kit 15 years ago.

Fortunately that turned out to be enough to make a new rainbow herd of silk cories. 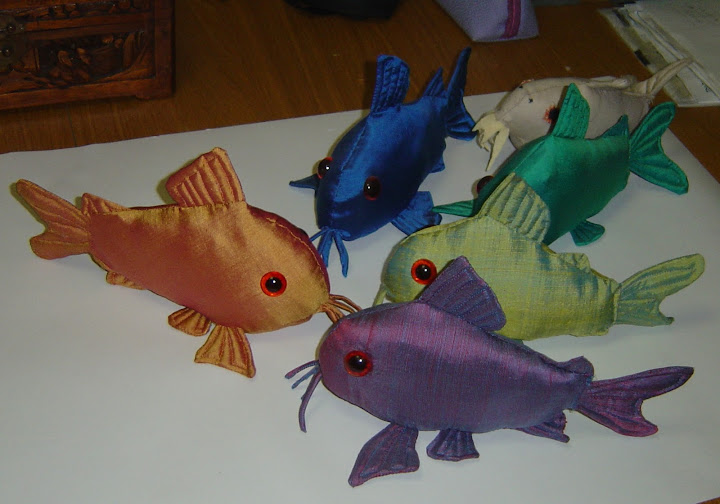 Yes, that’s Thai silk (apart from the zombie prototype at the back) and yes, they took ages to make. (While we’re at it – a brief shout out to Almeta, Bangkok as a great place to buy good quality silk without getting conned.) 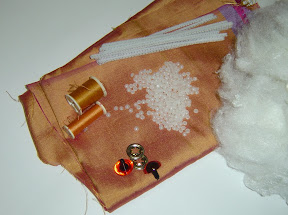 After several iterations the constituent parts that make up our cories were found to be as follows: 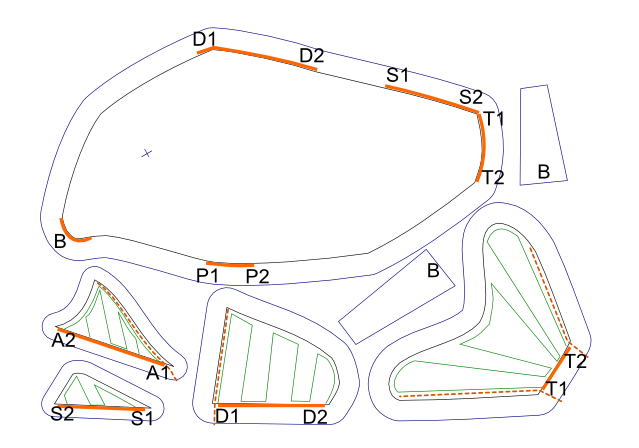 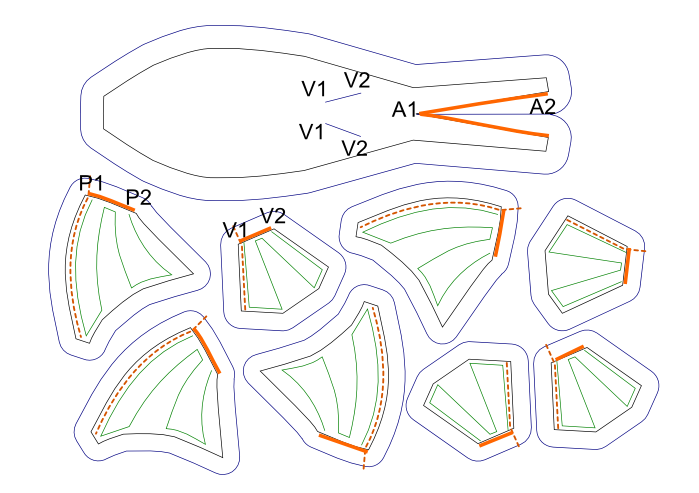 Blue lines for cutting, black for the main stitching, green for decorative stitching, thick orange for the joins between pieces, and dashed-orange to show where the pipecleaner wires go to help with shaping.

You can get this as PDFs (for printing out on A4):

Note: this write up is aimed at stuffed-object-making-neophytes. If you already know what you’re doing please try not to snigger too loudly, it’s disheartening ;) Also, the design probably isn’t child safe so take care.

From previous rabbit experience, the making of a soft toy goes thus:

Rabbits however do not have fins.

Lacking guidance on this matter, we decided to make the fins separately first, and insert them in place at step 2 while stitching the relevant body pieces together. They remain hidden ‘inside’ your fish while you complete step 2, and only are revealed in their full glory when you invert the skin in step 3. (At which point you fervently hope that you have managed to put them in the right way around.)

The printed diagrams are for use as templates when cutting your material (the blue lines are for cutting). We traced round the cut-out paper templates with tailor’s chalk, although a pencil would have worked fine too (probably better). These edges will be on the inside of the toy, but if you cut this accurately you’ll find the sewing easier.

Tip: thick orange lines on the templates indicate areas where the fins/body are joined together. On the fins with long stretches of orange, it helps to align the material so that it doesn’t fray along that edge. Pinking shears may help if your material has a tight weave (our silk doesn’t). 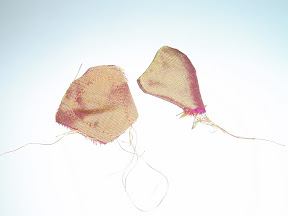 Next, match up the pairs: 1 body, 1 large back fin, 1 small back fin, 1 medium lower-rear fin, 1 tail, 2 large side fins, and 2 small belly fins. The dashed inner grey lines on the templates are the joins where you sew matching pieces together. They’re about 1cm from the cut edge. It’s a good idea to now copy them in pencil onto your material (one of each pair) to give yourself a guide for sewing.

The pairs of pieces for the fins and tail are sewn together next – leave the orange-lined parts open. Using a sewing machine for this bit is faster. Then turn them inside out, making sure you get the edges fully inverted (a blunt pencil to poke into the corners is handy here). 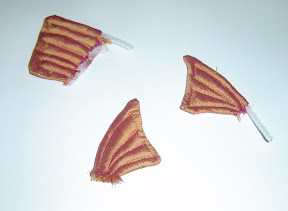 The next step is to loosely fill the fins with stuffing, and sew along the green lines to both flatten and add detail to the fins (and tail). You can put quite a lot of stuffing in – as much as can comfortably fit. When planning this, notice the dashed orange lines on the diagrams: that’s where a pipecleaner wire will go, so make sure you sew a supporting line to trap it. It’s easy to slide the pipecleaner in after doing the sewing, but if you’re confident you could try sewing with it in place. This is where a sewing machine does make a difference: these lines are visible on the finished fish so keeping them neat is worthwhile. We also suggest bending over the tip of the pipecleaners before insertion so that you don’t end up with sharp wires sticking out of your toy! 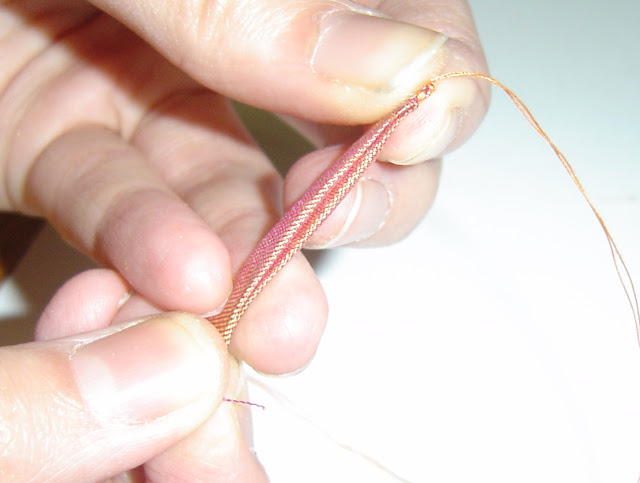 The nose barbels are tricky – being pipe cleaners wrapped in the same material as the rest of the cory. One way of doing this is to cut out the wedges of material and make little ‘socks’ by double-folding so that the edges are on the inside, then sewing along the edge (no chance of turning these tiny pieces inside out!). Finally insert the pipe cleaner. 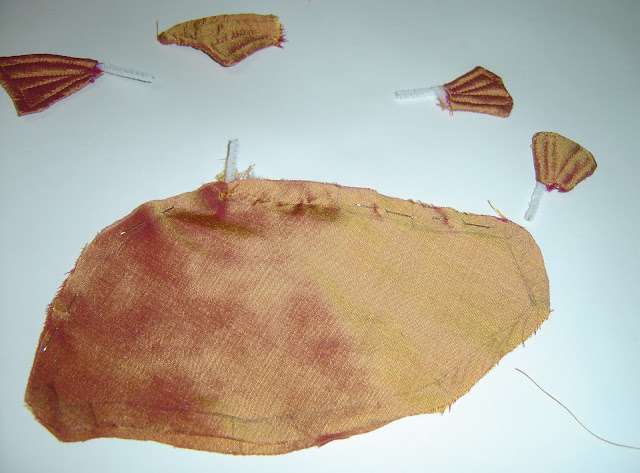 With the fins and tail complete, we now start putting the body together. Starting at its nose, you join the two body pieces together until the forehead peak where you insert the large back fin, sandwiched between the two body pieces; remember to put it on the ‘inside’ as you’re sewing, and double-check that the front of the fin with the pipecleaner is to the front of the fish. Now check it again (really – you’ll get a fin back-to-front at some point and it’s a real pain unsewing them!).

With the dorsal fin in place, continue sewing along to join the three parts together, then continue along the back until you reach the small back (‘adipose’) fin and repeat the process. Stop sewing after that fin is attached – leave the tail section open, as you’ll be turning the fish inside out through it. Hint: lining up the sections with pins and then putting some initial holding stitches though the fin sections before starting the main stitch, makes this all a lot easier!

Again, make sure the fins are put in on the ‘inside’, and are facing the right way (pipe cleaners to the front). In the photo above, we’ve got the rear fin pointing the wrong way (oops!).

Finally, join the lower side of the body pieces, one at a time, to the belly piece. Start at the nose and end at the tail, remembering to insert the large side (‘pectoral’) fins (on the inside!) as you reach then. Again, pins and initial holding stitches help. 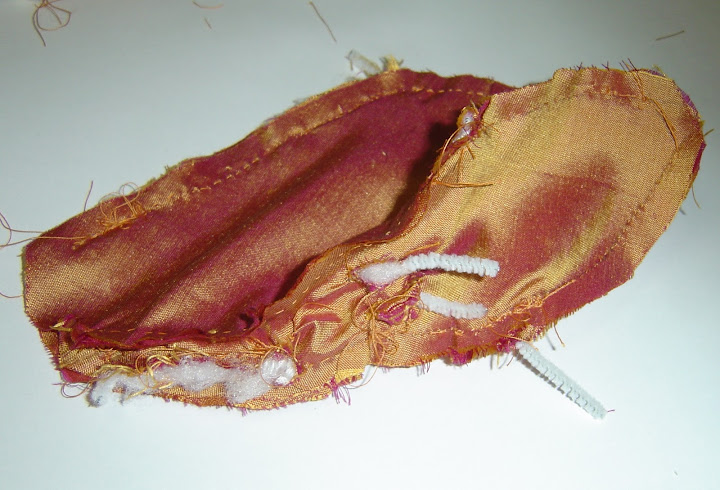 You now have an inside-out fish skin, open at nose and tail, with a bunch of pipecleaners sticking out round the edges and lots of fins hidden inside. So let’s invert it through the tail (if you find it a bit of a squash, concentrate on one fin at a time) and make a final check that all the fins are right ;) If not, now is the last chance to correct it! (We had to unpick and re-sew the lower rear fin here).

Now is also a good time to add the eyes. The ones we got work well (just a little hole for the post and it seals itself in place when attached) but need quite a strong squeeze to fasten in place: be careful doing this, you can tear/snag the material by accident if you’re rough. 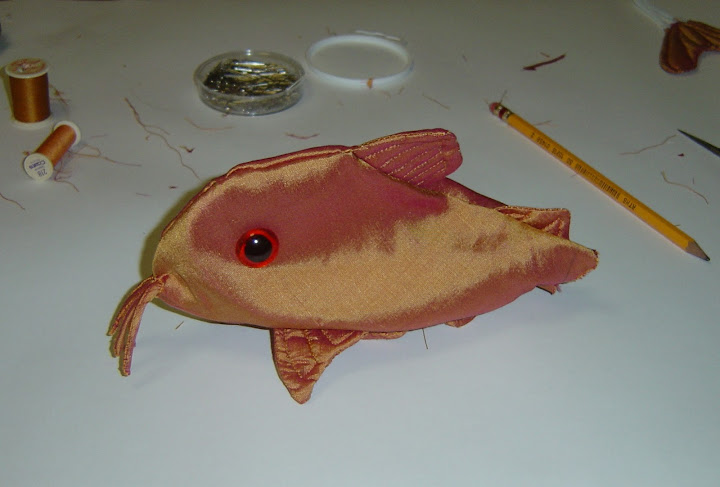 Next attach the nose barbels, closing the front of the fish. This is a bit fiddly to do (aren’t you glad you started this?). Start by bending the tendrils together and in an L shape, then insert the bare pipe cleaner end into the cory’s nose (ouch). Ensure that the nose seam is folded inside, then sew round the base of each tendril connecting them to the nose. Then run a few stitches top-to-bottom between the tendrils to close up the gap and stop the stuffing escaping.

Stuffing is next: in through the tail hole (ouch!) About 70g of the polypellets seems about right – those should be at the base of the fish so it sits properly. Then liberally fill out the rest with normal stuffing until it’s firm. Try and cover the pipe cleaner ends so they don’t make lumps and when you’re done, insert the tail (‘caudal’) fin and seal off the gaps in the same way as the nose (fold the seam inside, sew skin to tail, sew through the tail side to side, finish off any gaps). Pins help a lot here… 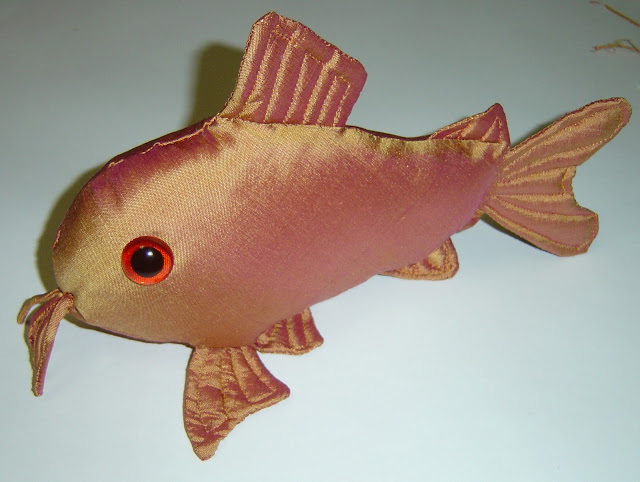 All done! Give it a spin: 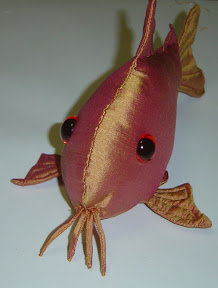 Introduce it to its new friends: 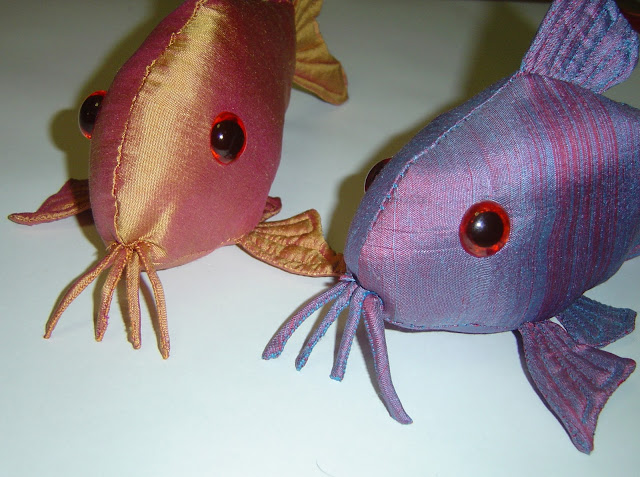 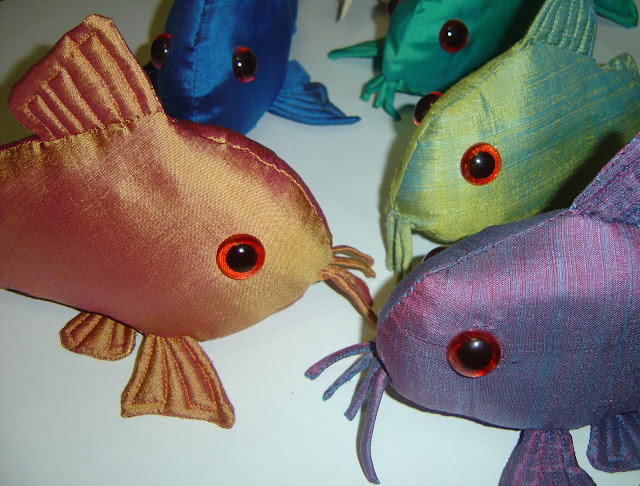 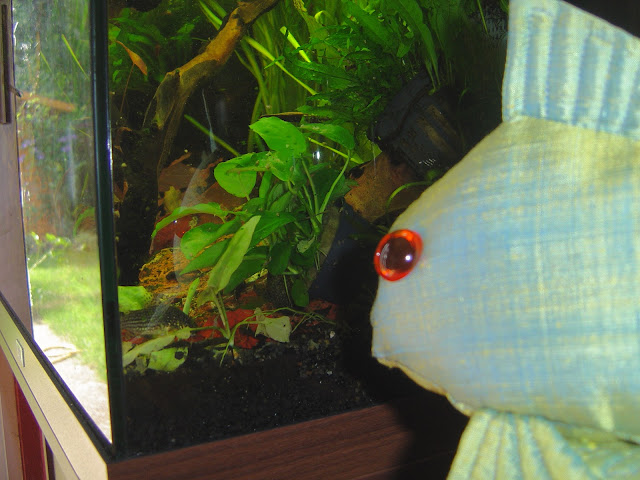 This work by Michelle Osmond & Michael Wright is licensed under a Creative Commons Attribution-ShareAlike 3.0 Unported License.